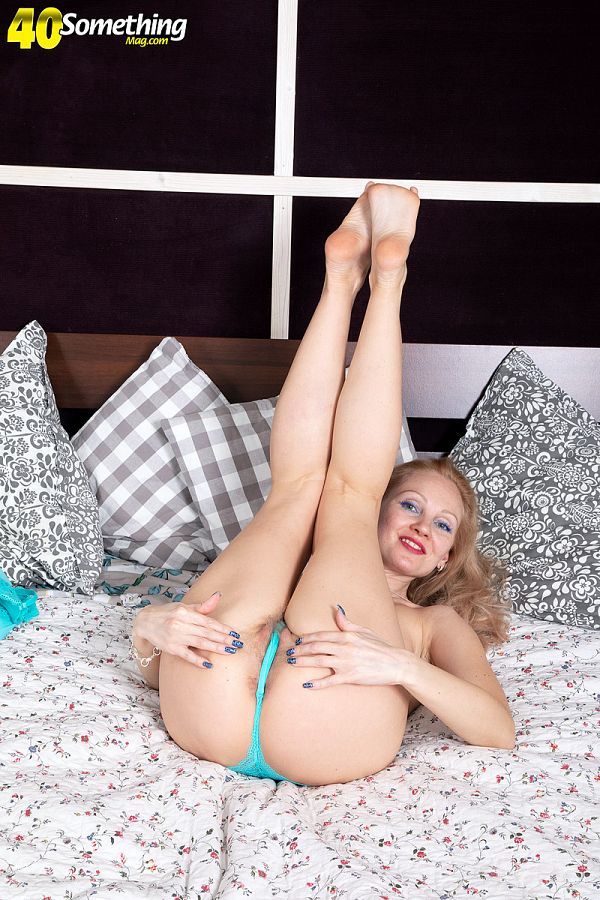 This is Foxy, a 43-year-old divorcee and mom from Moscow, Russia, and the truth is, we don't know a lot about her. You see, she wasn't shot by one of our in-house photographers. She was shot by a freelancer who thought we might enjoy seeing her. He was right. But he also didn't tell us anything about her other than the basic stuff on her model release.

We do know what we see: Foxy is very pretty. She wears her blond hair in pigtails, and she has long legs and a nice ass. In these photos and the video, she obviously enjoys showing off her legs and ass.

She also has a hairy pussy, which she fingers and plays with and toys with what looks like the pussy version of a butt plug. Early in the video, she pulls up her panties between her pussy lips, and her bush overflows. Very nice.

We know she was born on February 6, 1975, so she'll be turning 44 very soon. We also know she didn't go all the way, but who knows? Maybe one day, that photographer will contact us again and say, “Hey, guess what? Foxy fucked!” But until that day happens–if it ever happens–we'll enjoy what we're seeing here: Foxy, a very foxy lady from Russia.

See More of Foxy at 40SOMETHINGMAG.COM!

Register your 100% Free Stripchat account today and enjoy the hottest girls and couples live on cam! No Credit Card required! No restrictions or limitations! Unlimited access to all chatrooms!